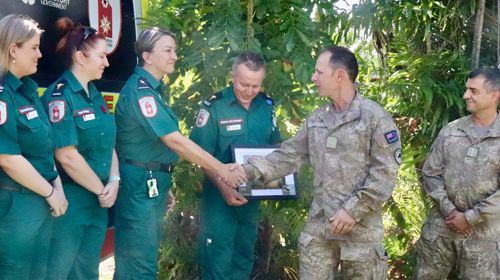 NZDF had been conducting pre-deployment training with the Australian Defence Force (ADF) in preparation for an upcoming deployment to Iraq, when a member of their contingent was found unconscious in the Robertson Barracks Swimming Pool.

The serviceperson was extracted from the pool by an Australian Army soldier and St John Ambulance was called.

The NZ contingent doctor assisted the ambulance crew at the site and on the way to the Royal Darwin Hospital.

Major Paul Cocker, New Zealand Army said that they were extremely grateful for the first responders in this incident.

“Due to the high standard of care provided by the paramedics, doctor and hospital staff the serviceperson has subsequently made a full recovery.

“The hospital staff praised the standard of care delivered by the NZ/AS medical team, and credit the serviceperson’s quick recovery to the fast and professional response provided by the ambulance crew and doctor.

“The NZDF wish to recognise the St John Ambulance crew for assisting in saving the serviceperson’s life and the standard of care that they delivered.”

St John NT CEO Judith Barker said that this was a welcomed story to report on.

“This incident has a great outcome and truly demonstrates the benefit of calling for emergency assistance as quickly as possible. In this instance our Emergency Medical Call Takers provided life-saving advice, our crew provided high level clinical care, all vital elements in ensuring that the serviceperson survived.”

“Thank you to Major Cocker and the New Zealand Forces for taking the time out to say thank you to our crews, all too often these people, like many who work in emergency services, are the unsung heroes committed to caring for our community,” Ms Barker said.

A small presentation was made by Major Cocker and Captain Nazmi to St John Ambulance as a token of their appreciation at the Casuarina Station at 10am on Tuesday 12November 2019.

NEW PARAMEDICS TO HELP THE COMMUNITY