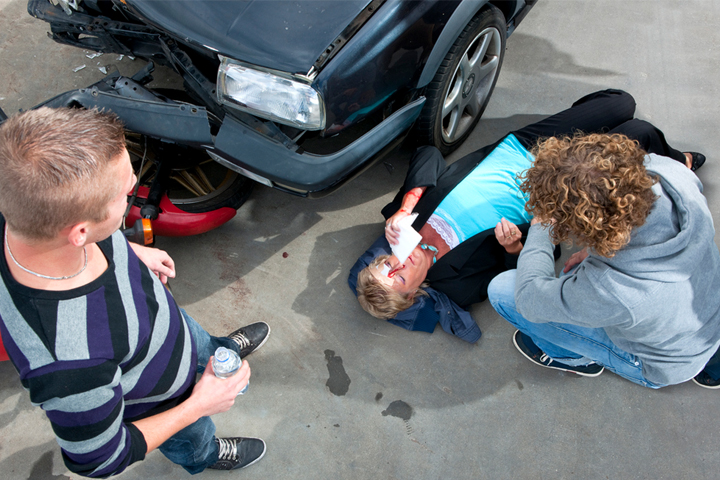 First Aid has always been a vital part of an effective emergency response and St John Ambulance NT is proud to train and certify over 10,000 Territorians each year, in the delivery of first aid. However, as the provider of the Northern Territory St John Ambulance Service, we are concerned by the number of emergency calls received to attend road accidents, by people without the skills to assist the accident victim effectively.

Effective and Immediate First Aid is the Key

One of the most common causes of death for victims of a road crash is anoxia – a lack of oxygen supply – caused by a blocked airway. On average, it takes less than four minutes for a blocked airway to be fatal. Even in areas with highly structured emergency care, the norm for ambulance response to a road crash is ten minutes. The application of first aid techniques, in particular the proper positioning of the victim prior to the arrival of the emergency response teams, can mean the difference between life and death in a vehicle accident. Fatalities and serious injuries from road accidents can be reduced when immediate first aid occurs. Research shows that between 5% – 15% of road accident deaths can be prevented by administering basic first aid to the casualty at the scene of the accident before the arrival of ambulance services.

When First Aid is applied at the scene of an accident or during an emergency, the potential costs imposed on the health system are dramatically decreased. For example, a serious burn injury treated immediately with running water, reduces the costs of emergency hospital care following the application of first aid. Immediate First Aid is also vital to ensuring reduced patient recovery times.

First Aid builds the capacity of a community and gives people the skills to look after themselves and one another in times of great need. Recent natural disasters, (ie. Christchurch Earthquake) have highlighted the great demand that is placed on Ambulance and Allied Health Services during these events.

Anyone can provide assistance at a road crash, but the better skilled in First Aid the rescuer is, the more effective and beneficial the support offered will be. Many people happen across a road accident because they are in one of the vehicles involved or are in a passing vehicle. The quality of their assistance is strongly dependent on the individuals having received adequate training in first aid.

It takes only 4 minutes for a road accident victim with no serious injuries to die from a blocked airway. It can take up to 10 minutes for an ambulance to arrive at the scene of an accident.

57% of deaths on the roads occur within a few minutes of the crash at the accident scene.

Only 1 in 20 people in the Territory currently have the first aid skills to save the life of a road accident victim.

Inexperienced and young drivers have approximately 3 times the rate of road crashes and fatalities of older drivers.

First@Scene - First Aid for Learner Drivers across the NT

St John Ambulance NT aims to ensure that future applicants for driving licenses in the Northern Territory know how to behave in the event of an accident, and the measures that they can take to assist road accident victims; including emergency action such as evacuation of passengers and basic knowledge of first aid.

It is our long term vision to see all learner drivers in the Northern Territory trained in First Aid as part of getting their drivers license.

First@Scene is a St John Ambulance NT project initiative to reduce road accident deaths and serious injury. It follows increasing concern by ambulance service professionals regarding the unnecessary loss of life at the scene of many road accidents where first aid has not been administered.

First@Scene is an online first aid course where Territorians can access quality first aid awareness training and practical advice about attending to the scene of an accident.

Course material is presented online, in an interactive manner, where the student learns from both text and pictorial demonstrations of technique and approaches to first aid skills, in addition to providing opportunities to revise principles learnt throughout the course. Online presentation and all content is designed to relate directly with participants aged between 16-18 years of age. Following the presentation of course content, the student is then prompted to answer a series of revision questions, testing their comprehension of first aid training taught.

St John Ambulance NT has a diverse and geographically broad reach throughout the Northern Territory in the delivery of training. With networks already established in remote and indigenous communities, secondary education and training providers and youth and volunteer movements. We aim to promote and deliver the First@Scene training course, focusing on participants between the ages of 16 and 18 years of age, in both urban and remote regions of the Territory. Through the secondary education system of the Northern Territory, we aim to train approximately 2000 Year 10 students each year, Territory wide.

Introduction of first aid to learner drivers, through the St John Ambulance First@Scene online training initiative, will provide a critical link in the education and survival of road crash victims. Compulsory first aid training is already mandatory in many European countries and St John Ambulance NT believes that it is time to acknowledge this important issue and join the international leaders in this area by implementing this lifesaving program into the Northern Territory and being the first in Australia to adopt an approach that results in First Aid training being delivered to learner drivers.

St John Ambulance is committed to working towards achieving our most visionary goal yet! St John Ambulance NT is working towards ensuring that all new drivers in the Northern Territory know how to behave in the event of an accident, and the measures that they can take to assist road accident victims; including emergency action such as evacuation of passengers and basic knowledge of first aid. St John Ambulance NT is excited about achieving success and making a positive impact on the road toll across the Territory as a result of implementing the First@Scene initiative.

St John Ambulance NT believe that our vision to “save lives on our roads” is shared across the country. An issue that increasingly attracts media, public and political interest, Australia’s significant road toll will continue to be of concern to the broader Australian community. From a national perspective, St John Ambulance Australia is seeking the support of the Commonwealth Government in its efforts to raise the issue and importance of First Aid for all road users, across Australia. Currently the coordination and implementation of Driver Licensing is managed independently by each State and Territory. St John Ambulance Australia believes that there is a genuine opportunity to raise this matter on the national stage and gain momentum and support for the introduction of First Aid training for all new road users.